Written by Lawrence Katsidis on April 28, 2017. Posted in Race Reports

The first round of the championship ended with the familiar sight of Graeme Holmes holding the trophy, but he got there via a long and eventful path on a weekend that saw Dennie Rumble take the points and Aaron McClintock keep him honest all the way.

An early altercation between Graeme Holmes (Dallara Opel Spiess F304) and John Boothman (Dallara Fiat F301) saw the session red-flagged and drivers cooling their heels in pit lane while the cars were cleared away. When the car returned to the circuit the Alpine Motorsports car of Dennie Rumble set the pace as expected, the National Series driver claiming a well-deserved pole despite limited miles under his belt in recent times and no set up laps. Aaron McClintock was not too far behind and looked to be Rumble’s major threat, with Muddle struggling to find last year’s pace but ending up a respectable third. Rodney Brincat in the Glass Benders Dallara Opel Spiess F304 was hampered by an incorrect selection of gear ratios, but was still able to put the car on the second row of the grid.

Glenn Lynch, having made a late decision to run the Dallara Fiat F396 Class B car, managed to out-qualify a number of later model cars to end the session in 5th, ahead of the two Dallara F307’s of Canberran drivers Andrew Wlodek (Honda) and Ron Coath (Mercedes). Ron Bennet (lately of Bundaberg, now resident of Greater Western Sydney – not so attractive but a lot closer to race meetings) managed well from a last-minute preparation to put his Dallara F301 Opel Spiess on 8th, with the Class B cars of Kevin Lewis (Dallara F396 Toyota) and Rod Anderson (Reynard 893 VW) rounding out the top 10.

Of the 17 car entered we lost the SYDNEY PHOTO BOOTH’s Dallara F304 Renault of Lawrence Katsidis on Friday with air issues (i.e. the piston decided it would aid circulation by punching a hole in the block); Rodney Baker’s debut in the Dallara F301 Opel Spiess ended with a broken clutch (despite the extraordinary efforts of Messrs Gardiner, Sparkes, Boothman and Holmes the car was beyond redemption, but nothing that some time and effort can’t fix for next round); and Phil Morrow successfully completed qualifying (Look! No oil leaks!!) only to have the ring-gear fail when starting the car for the first race. But there were 14 starters when the serious stuff got underway on Saturday afternoon.

Race 1 on Saturday afternoon was a 15 lap race run in clear and sunny conditions, and at the front Rumble led McClintock, with Muddle and Brincat struggling for 3rd all the way to turn 4 before the deal was settled in Brincat’s favour. Muddle was struggling in the cockpit with a displaced dash, and in pressing it back into place managed to flick off the ignition and coast to a halt (the car clearly got the irrits with the driver for this, because it didn’t want to start again all weekend!). Behind the leaders Holmes was making his way through the field, but on lap 2 attempted what could be best described as an ‘ambitious’ move on Glenn Lynch, leaving the two cars in Team Holmes colours in the kitty litter, resulting in a safety car being deployed for 4 laps.

On the restart, Rumble and McClintock took off and opened a big gap on the field. The two drivers put on an epic battle, with McClintock challenging on several occasions and having his nose in front as they crossed the stripe on lap 12 only for Rumble to regain the spot under brakes into turn 2. Despite being the quicker car, with a sizzling 57.96 lap, McClintock couldn’t manage to get past, and Rumble took the victory.

While Brincat had a lonely race in 3rd there was plenty of action behind him. Wlodek held 4th for a substantial part of the race until he retired with fuel issues. This elevated the other F307 of Ron Coath, who having lost a spot to Ron Bennet early in proceedings battled hard to get the spot back mid race and opened up a comfortable gap. Behind them, Rod Anderson held onto 6th ahead of a group of cars that included Rob Sviderskas  (Dallara Opel Spiess F301), Kevin Lewis and Glenn Lynch – several laps down but still keen to enjoy a good dice nonetheless. Lynch worked hard to get ahead of Lewis and then had several attempts at Sviderskas, but all to no avail.

Anderson was given a couple of laps reprieve while all this was going on behind, but in the closing laps he was increasingly under pressure from Sviderskas and another lap might have seen a change of position. Denis Lesslie (Ralt RT34 Honda) finished behind them a lap down, with Lynch in 10th the last of the classified finishers.

On Sunday conditions were again perfect for the morning’s 12 lap race. Unfortunately McClintock did not get away cleanly from the line, and as a result there was a shake-up in the order. Brincat was able to slot into 2nd and Coath 3rd, with Rod Anderson and Rob Sviderskas moving up the order, but with Ron Bennet missing out and dropping several spots. Holmes was on the charge again, moving to 6th on the opening lap and making up a further position on lap 2; and McClintock was following him through the field to be 6th by lap 2 directly behind Holmes.

The 3rd lap saw Coath pressing hard to challenge Brincat, perhaps too hard, because he looped the car at the ‘Fishhook’ and, unable to get the car re-started, the safety car was deployed. The safety car, being deployed mid-field caused some confusion amongst the drivers and it took several laps to rectify the situation. As a result at the re-start there was a large gap between some of the cars, robbing spectators of the chance to see Holmes (now 3rd) and McClintock (now 5th) challenge the lead cars. It didn’t trouble Rumble, and at the re-start he moved clear to comfortably complete his second win of the weekend. Brincat was never seriously challenged for 2nd, although McClintock managed to close within a few seconds, recording the fastest lap of the race in the process.

Holmes brought his car home in 4th, ahead of fellow rear-of-grid starter Wlodek, who was still struggling with heat stress from the previous evening (see Short Bursts below). Anderson, Lynch and Bennet were in close pursuit, but it was Bennet who got the better of the other two on the penultimate lap. Sviderskas followed in 9th and Lewis, struggling with an electrical miss rounded out the top 10. Denis Lesslie was the only other finisher after Muddle’s car failed to start in the dummy grid.

The 15 lap Trophy Race saw pole-sitter Rumble start favourite due to his two earlier victories, but McClintock’s race pace and Holmes’ record meant their chances could not be discounted. Of the cars on the front two rows Brincat might have been the outsider, but in the end he was the one who got the jump and led through the first lap – at least until turn 10 where he looped it in front of Rumble and brought both cars to a halt – undamaged but stopped in the middle of the track.

Add to this McClintock running off the road out of the Fishhook and it was Holmes who was left in front of the field as the safety car was deployed for the third time on the weekend (unfortunately that’s a FRCA record). As the cars circulated the order was Holmes, Wlodek, Lynch, having jumped 4 spots on the opening lap, Bennet and Sviderskas, with the two quickest cars of McClintock and Rumble in 9th and 11th respectively, and the early race leader Brincat out of contention having lost several laps in the proceedings.

At the restart the main interest was in the progress of McClintock and Rumble through the field: by lap 5 they were in 8th and 9th respectively, battling to get past Coath; on lap 7 they passed Coath and Rumble moved ahead of McClintock; on lap 8 Rumble was up to 5th but McClintock was back in 8th again behind Coath.

Holmes and Wlodek were opening up a gap, but Lynch was doing a good job hanging onto 3rd, with Bennet and Sviderskas close behind. Rumble passed Sviderskas on lap 8 to move into 5th, then passed Bennet on lap 9 to move into 4th, and passed Lynch on lap 11 to move into 3rd. At this stage the gap to Holmes was about 8 seconds, and on lap 12 Rumble set the fastest time of the weekend and that reduced it by half.

However between the two of them was Wlodek, and he wasn’t going to give up second lightly, making Rumble work hard for the spot. Another quick lap from Rumble on lap 15 closed the gap to Holmes considerably, but the veteran held on for what on Saturday, with a DNQ and a DNF, seemed like an unlikely conclusion to the weekend. Wlodek finished in a well-deserved 3rd, ahead of the fast closing McClintock ,and Lynch once again did an impressive job in an older car leading Class B in 5th outright. Bennet finished ahead of Coath with Anderson following closely behind. Sviderskas once again had little to show for his strong early lap efforts, eventually finishing in 9th, ahead of Lesslie in 10th. Lewis retired early with a recurrence of the electrical problems, Brincat completed only 8 laps and Muddle’s car once again failed to fire on all cylinders.

The points table can be found here.

Too Hot to Handle!

Saturday evening saw FRCA competitors dining at the Hibernian, home of The Hibo Hero Hot Burger Challenge. Enter the intrepid Andrew Wlodek, eager to take on the challenge, equipped with the standard precautions issued by the Hibernian (latex gloves and a tall glass of milk) but without the aid of a FIA approved on-board extinguisher.  Technically Andrew did win the challenge, outside medical assistance only being required after he had left the hotel, but most spectators awarded a points decision to the burger.

A red flag in Qualifying and safety cars in all three races – for those of us who have raced Formula Ford is a case of ‘Been there, done that’ and as much as a mid-race break to get your breath back can be rather helpful it would be good if we can improve on this next round.  Holmesy was involved in two of those incidents, and he was definitely not impressed. You can
check out the video at:
https://www.youtube.com/watch?v=K-kNNvP40Fg

(Go straight to the 4 minute 30 second mark).
And we offer this picture for anyone who has an entry in our caption competition: 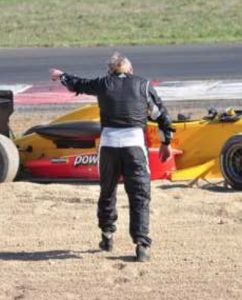