Written by Lawrence Katsidis on April 18, 2016. Posted in Race Reports

The second round of the CAMS NSW Motor Race Championships saw Formula Race Cars competing at Sydney Motorsport Park on the Gardner Circuit, and for the second successive round Nathan Gotch proved unbeatable in the AGI Sport Dallara F307 – taking pole position, scoring three race wins and setting a lap record – and in the process establishing a commanding lead in this year’s championship. Qualifying A field of 15 cars were entered for the weekend, including Rodney Brincat having his first championship run in the Glass Benders Dallara F304 and the Mexican Troika of Graeme Holmes, John Boothman and Rod Anderson making their first trip north for the year. From the previous round we were missing Glenn Lynch – can we have a FRCA round without Lynchy? I’ll have to check the constitution, it’s a totally unprecedented situation and frankly it unsettled the meeting and we hope the situation is restored to normal soon. Also missing was Richard Scarcella, still to complete the repairs on his F307, as well as Nick Fillipetto’s F304 which has been sold and will be travelling north to Queensland, hopefully not to a sunny retirement. 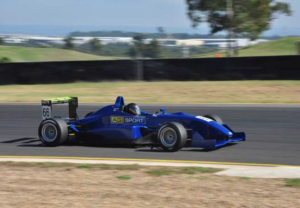 Qualifying was dominated by Gotch, who set a time of 1:47.75. That wasn’t to be bettered all weekend and was and almost a full 5 seconds ahead of the rest of the field. Clearly we all have to lift our game to keep Nathan in sight! Behind Gotch things were more competitive, with Aaron McClintock setting a very respectable time in the 1:52’s to take the front row spot in his Dallara F301 ahead of some later model cars. Holmes and Brincat filled the second row in their F304’s setting times in the 1: 53’s and shading Greg Muddle (Dallara F301) and Andrew Wlodek (Dallara F307) who both had times in the low 1:54’s and filled 5th and 6th respectively. The 4th row was occupied by Boothman and Ron Bennet in a pair of red Dallara F301’s, ahead of the first of the Cup Class cars of Ross McAlpine (Dallara F307) and the slightly hot-under-the-collar Reynard 923 of Phil Morrow who started the weekend chasing water problems but managed to qualify 10th. Rod Anderson (Reynard 893) and Rob Sviderskas (Dallara F304) qualified 11th and 12th respectively, Sviderskas having to make the most of some inadequate gear ratios. Al Palmer had some rear wheel issues that hindered his qualifying efforts in the TOMS Toyota F036, whilst Ron Coath continued to endure the difficult task of coming to terms with his Dallara F307: immediately post qualifying you could have picked up a F307 quite cheaply, Ron having again battled gremlins on Thursday and Friday that robbed him of valuable seat-time.

Whilst the rest of the field was on track qualifying the Sydney Photo Booth Dallara F304 of Lawrence Katsidis sat forlornly in the garage with its gearbox strewn all over the floor with Rick performing major surgery and Lawrence undertaking the Herculean task of ensuring Rick put all the pieces back in the right order without getting distracted.

Hot and sunny conditions for the drivers in what would eventually be an 11-lapper (time certain races always leave us guessing) for a full field of 15 cars. McClintock had the jump off the start and managed to hold that lead all the way to turn 2 when Gotch restored order. Wlodek briefly pushed his way into third ahead of Holmes with Muddle (bad start) Brincat (worse start) and Anderson (sideways!) being the big losers off the line. Boothman made the most of this to briefly claim 5th, whilst Sviderskas moved from 13th to 9th, a position he’d hold throughout the race. Once the early jostling was out of the way the order was Gotch, McClintock, Holmes, Wlodek, Muddle, Boothman, Brincat, Bennet, Sviderskas and McAplie in tenth, leading the Cup Class. Lap 2 saw McClintock retire with a loss of power, which proved to be a blown head gasket and would sideline the car for the rest of the meeting. The following cars all moved up a position but while Gotch and Holmes started to open up margins that would grow over the length of the race there was a good battle between Wlodek and Muddle for 3rd and Brincat putting pressure on Boothman for 5th. 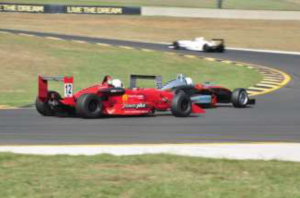 Muddle had several attempts to pass Wlodek and eventually was successful into turn 4 on lap 4. By that stage Brincat had passed Boothman and had latched onto the back of Wlodek and was also able to make his way through later on the same lap. With Wlodek’s car cleared he set about chasing down Muddle, and was able to move into 3rd place with a tow down the straight on lap 8. Wlodek and Boothman meanwhile had maintained good pace, and the gap to Muddle closed over the remaining laps such that there was very little between all three cars as they crossed the finish line. Rod Anderson followed in 10th, the first of the Cup Class cars, having a busy race after his poor start dropped him to the rear of the field.

McAlpine had led the Cup Class in the early stages before being passed by Palmer and Morrow on lap 2, and then having a moment on lap 4 to put him out of contention. Anderson meanwhile plugged away with consistently quick times that enabled him to catch and pass Morrow on lap 7, and then chase down Palmer on the last lap to claim the honours. Morrow crossed the line in 12th behind Palmer nursing the overheating car home, and McAlpine followed with his car sounding like farm machinery. Coath completed the finishers, but with a significant improvement in lap times and a far happier driver than we’d seen earlier in the day.

Sunday morning brought warm and sunny conditions again, and 14 cars lined with McClintock the only car missing from the field. Holmes got the initial drop on Gotch – that didn’t stop the officials giving Gotch a false start penalty of 5 seconds – but the order was soon restored and Gotch again drove away from the rest of the field, albeit in marginally slower that the day before. Wlodek made a good start from 5th to move into 3rd, ahead of Brincat, Katsidis, Bennet, Boothman and Sviderskas, with Muddle dropping from 4th to 9th with another poor start, and Coath making a promising jump to 10th.

With the front two cars again clearing out, the early interest centred on Brincat trying to find a way around Wlodek for 3rd place, and Muddle trying to work his way back through the field. Brincat eventually made his way through with a tow down the main straight on lap 4, and although by that stage the gap to Holmes was too big to bridge he did manage to pump out faster lap times in the closing stages. Muddle had managed to pass Sviderskas on the opening lap, and was up to 6th at the end of lap 2, but then had to work his way past Katsidis and Wlodek to get back to the position he started from. By the time he was there he needed a telescope to see Brincat at the other end of the main straight. The cars behind Muddle were in close proximity – Wlodek, Katsidis, Bennet – and Bennet was able to make the best of Muddle moving through the field, passing Katsidis and Wlodek on the following lap in each case. Only a brief excursion to the grass exiting the new section of the track stopped him putting more pressure on Muddle in the closing stages of the race.

Wlodek kept pressure on Bennet to the end ahead of Katsidis, Boothman and Sviderskas, with gaps between each of these cars opening consistently over the closing stages of the race, and Sviderskas in 9th being the last of the cars to complete the full number of laps. Coath followed in 10th – or in 1st as by some strange reckoning he was the first car to be shown the chequered flag, exploiting the tactical advantage of having a blue F307 (they all look the same) –having held position throughout the race and having dropped his lap times by some further margin. Clearly the light at the end of the tunnel was getting closer (and it no longer looked so much like a locomotive).

In the Cup class McAlpine had again made a promising start and again had a mid-race moment, the F397 not offering the arm-room, leg-room or aero that Ross has become accustomed to. Anderson had moved into the class lead on lap 3, ahead of Palmer, his car improving but still not handling to his liking and Morrow rounding out the field.

The field was down to 11 cars for the Trophy Race, with McAlpine and Morrow both out with drive issues and Boothman jumping the start by so much that he was 100km down the Hume Highway by the time the cars rolled out (probably looking to get some secret test laps in at Wakefield Park while we were all otherwise ditracted). The race quickly settled into a familiar pattern – Gotch first daylight second; Holmes following; Wlodek getting out of the traps quickly (but not fast enough to jump Brincat this time); and the rest of the field engulfing a poor-starting Muddle.

By the end of the first lap the top 3 had settled with Brincat in 3rd and those three opend up consistent gaps for the remainder of the race, with only a brief moment for Brincat on the penultimate lap upsetting the pattern. Behind them, Wlodek led Bennet, Muddle and the fast-starting Coath ahead of Palmer, Katsidis and Sviderskas, with Anderson bringing up the rear. Muddle worked his way past bennet on lap 2 and then had a race-long struggle with Wlodek – which pretty much looked the same as the race-log struggles they had in the previous 4 races this season – with Wlodek able to hold out Muddle quite effectively to take 4th place. Bennet had good pace early in the race making this a three-way contest, but tailed off in the closing stages.

Coath had made a flying start off the line and was in 6th at one stage, but settled into a consistent run behind Bennet, but with sufficient pace to hold Katsidis behind him, the later having to spend the opening lap behind Palmer. Sviderskas also found himself back in the pack and under threat from Anderson who was able to take position on lap 2. The three cars – Palmer, Anderson and Sviderskas – provided the most interest in the race, never more than a second apart over the journey and only three tenths separating them as they crossed the line. The only car failing to finish was Katsidis, who managed to spin the Dallara coming out of the tight hairpin 2 laps from home and was beached on the ripple strip.